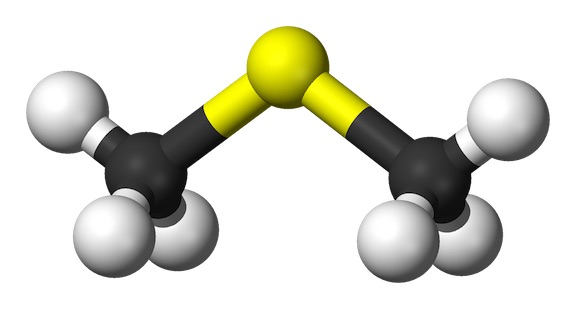 DMS stands for dimethyl sulfide. The chemical formula for this organosulfur compound is made up of two carbon atoms, six hydrogen atoms and one sulfur atom. The elements that make this flavor compound up are organized as you can see in the structure shown. This compound is naturally found in many different beer styles, but if concentrations are too high it will give off the off the flavor of cooked vegetables. Think of canned corn, cooked cabbage, or even cooked shellfish. Yum, Right?!

How does it get into beer?

During kilning SMM will thermally decompose, DMS be formed, and the DMS will volatilize into the air. DMS has a low boiling point of 99.14 degrees fahrenheit. Perfect right, during kilning DMS just floats away?! However, for lighter malts like those used in lagers the SMM doesn’t decompose as much during kilning, so light malts tend to contain higher levels of SMM.

Now think about the next time these light malts will be subjected to high temperatures during the brewing process. If you thought of the mash then you’re right! During both the mash and the boil, if SMM is present, DMS will be formed by thermal decomposition. The benefit of the boil is that it will also drive DMS off (remember that boiling point?)! So boiling for a longer time might help to reduce DMS levels, however you have to balance that out with the loss of other flavor compounds you might want.

What levels are found in beer?

DMS is found in beer, and we like the flavor as long as DMS concentrations are at the right levels. Like many other flavor compounds, DMS is considered an off-flavor in beer if the concentrations are too high. The flavor threshold of DMS in beer is 30 ppb, but that can vary quite a bit from person to person. Lagers tend to have the highest levels of DMS because of the malts that are used, with levels varying between 40 and 175 ppb. Ales on the other hand tend to have much lower levels, typically ranging between 10 - 30 ppb. If you’re brewing beers with potentially high levels of DMS you should add this compound to your sensory program and consider sending a sample of your beer to the lab for testing. Knowing your baseline levels will help you to determine if changes in your brewing process over time might affect this compound for better or worse!

If you send your samples in to a lab for DMS it's good to know what you should expect for results, and what to do with those results once you've got them. Here is a picture of the type of report we will send you once we've finished the analysis of your samples. How do we get these results? Labs that measure DMS, like us, typically use headspace gas chromatography to measure DMS. We use a gas chromatography (GC) with a mass spectrophotometer (GC-MS) for our detector. This compound is difficult to measure, even using this sophisticated instrumentation. We employ an internal standard (ethyl methyl sulfide) to account of any instrument variations between runs. To determine DMS in the beer from the chromatogram (read out from the GC) we identify each compound based on a unique isotope so we can be certain it's DMS and EMS we are measuring. Every day we run samples we run a new set of calibration standards, double check that our standards are giving us the response we expect, and making sure our calibration curve has an r-squared of at least 0.998.

You might be wondering what you should do with the results once you've got your report. First, these results give you a great baseline of where your beer is currently at. Second, if DMS is an issue for your beer, then you might consider making changes to your brewing process. If you do make changes then make sure to send new samples in to your lab to see how those changes affected the DMS levels. This test is also a great way to check to see if your DMS levels are within the parameters for the style of beer your brewing, and to compare against your sensory panel.